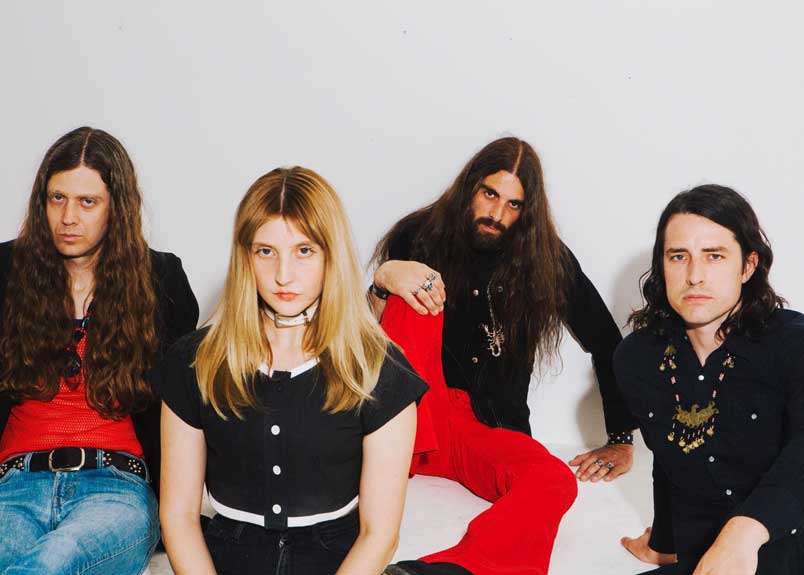 Helltown, the forthcoming third album by Electric Citizen is, in many ways, a homecoming.

While the title may seem fittingly metal (if not exceedingly so), it actually has real relevance. Helltown (all one word), while also multidimensional, is named after the Cincinnati, OH neighborhood in which the band lives, practices, and where the album was written, recorded and mixed. Now known more prosaically as Northside, Helltown earned its name in the 1800s due to its reputation for rowdy taverns frequented by the neighborhood of factory workers and immigrants.

Inasmuch as Helltown is an ode to the band’s home and its buried past, it also represents a return to the grittier sound of their 2014 debut, Sateen. Furthermore, it marks the return of original bassist Nick Vogelpohl, who rejoins vocalist Laura Dolan, guitarist Ross Dolan and drummer Nate Wagner. It’s a fun, tough, dirty rock n’ roll album.

“In many ways this album is a realignment to the first,” Laura says. “We experimented a lot on the second album, some of which we learned we didn’t like.” Electric Citizen’s 2016 album Higher Time was an expansive and somewhat cleaner effort mixed by Black Keys engineer Collin Dupuis at Easy Eye in Nashville, TN. It was a landmark moment for the band earning considerable press praise — Consequence of Sound named it in the 20 Most Anticipated Albums of 2016 with “the most breakout potential of all the young bands on this list.” And, the band’s endless touring since the first album earned them stints opening for acts like Pentagram, The Crazy World of Arthur Brown, Fu Manchu, Budos Band, Wolfmother and playing renowned festivals like Psycho Las Vegas, Psycho California and Desert Fest Belgium.

What sets Electric Citizen apart from contemporary heavy counterparts is their song writing. The band writes concise, 3-minute, heavy rock songs. While others might now be following suit, when they started, most bands of their ilk were content writing drawn-out slow doom dirges. Regardless, none can deliver quite like Electric Citizen: Laura’s captivating star-power, Ross’ perfect tone and riffs, Nate’s pugilistic and swinging beats, glued together by Nick’s gliding bass lines.

“Heart Attack” opens the album with a furious galloping rhythm, crunching guitar with a monolithic scooped midrange tone and Laura’s signature wail, double-tracked to create a haunting effect. From the first 10 seconds, you’ll be headbanging ferociously, ecstatic to have Electric Citizen back, and back to basics. “Ripper” is exactly that, a shredding 3-minute ripper, “The Pawn” boasts subtle pop hooks deftly tucked into a bashing tune. “New Earth” shows why the band continues to garner high praise for Laura’s dramatic vocals and the band’s skill at penning bonafide songs, rather than just a collection of riffs.

Helltown will be available on LP, CD and download on September 28th, 2018 via RidingEasy Records.