We’re beyond excited to officially announce one of our newest signings Mick’s Jaguar! We learned about MJ about a year ago, they sent in a demo of 4 songs and we said “this is awesome, let us know when you have a record”.  They came back with a fucking banger of a rock n roll record, like if Thin Lizzy and The Sex Pistols had a rebellious love child.  You can hear them on the latest potcast here. 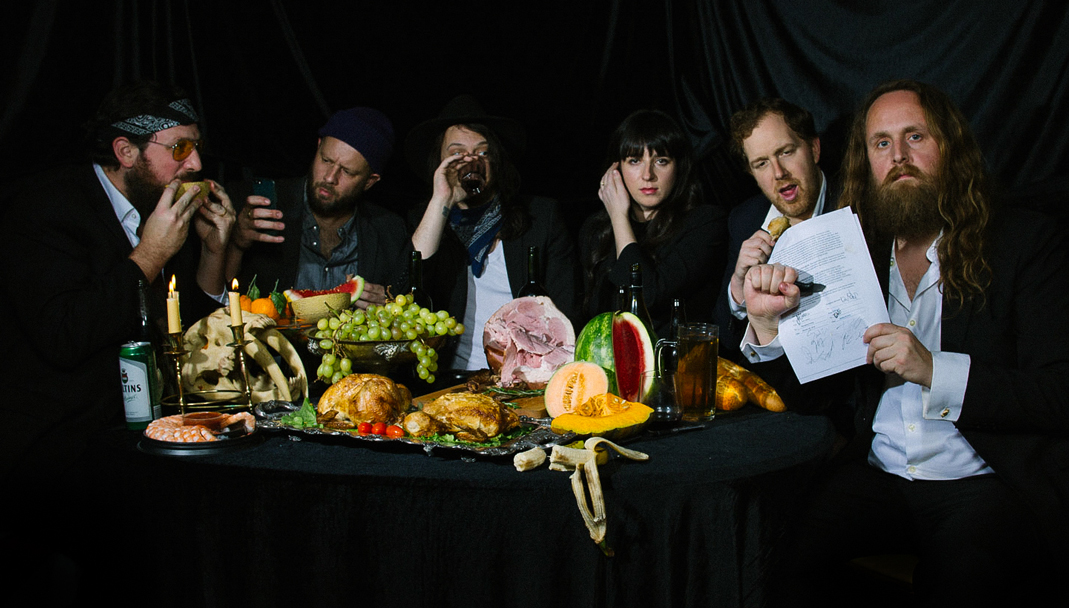 This isn’t LA and Mick’s Jaguar is a product of their environment: a windowless dungeon practice space 20 feet below the trash covered sidewalk of the Lower East Side. Rats, grime, the sounds of the city; Mick’s Jaguar gleefully pillages the history of rock music to create thoroughly modern, but classic rock and roll. Not quite punk, but not metal either, this is hard rock and roll that’s been put through the brain blenders of 6 musicians who pair their Judas Priest shirts with Steely Dan hats. They claim no musical lineage to New York – they just live there. If you need to compare them to something, the night AC/DC played CBGB’s would be about as close as you can get.

The group formed as a drunken Rolling Stones cover band, and after a few years of mainlining Stones songs and playing sporadic shows marred by violence and sprayed by beer, they started writing originals that attracted the attention of RidingEasy Records. And their new album, Fame and Fortune, sounds absolutely nothing like the Stones. The three guitarists — yes three guitars — open the album with a riff of buzzsaw intensity that would make a Ramone proud. But then like Jim Morrison sashaying into a wine shop, it drunkenly careens into a big sounding rock and roll album somewhere in between Van Halen and Tres Hombres. Guitar solos abound, Thin Lizzy harmonies soar, the bass and drums make a groove that will shake the asses on the dance floor and put a rumble in your loins. Songs about life, death, cars, blood, murder, sex, drugs and booze are the world of Mick’s Jaguar. Don’t forget – this is what rock and roll is all about. Listen close and you’ll hear hat tips to your bands, Mick’s Jag knows their history and likes to rip it apart.

Recorded in Brooklyn at Figure 8 Recording by engineering wizard Philip Weinrobe, and fueled by a steady diet of Allen’s Coffee Brandy, the Fame And Fortune sessions resulted in only one hospital visit and it just might be your favorite album of 1978, 1988, or 2018. This is music that’s made for listening to while driving fast in your car, and while relaxing at the local strip club. It’s okay to have fun. Cute indie bands make everyone puke. That shit stops now. Let there be rock.

New York City’s Mick’s Jaguar will be releasing their debut album “Fame and Fortune” on June 22nd – only on RidingEasy Records.