Ladies and Gentlemen, we present to you MONDO DRAG!!! 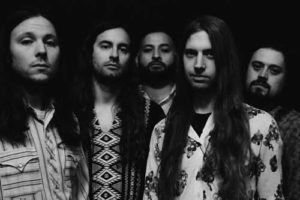 The creatures known as Mondo Drag hailed from deep along the banks of the wild Mississippi River where they created ominous, spiritual, savage psychedelic revival sounds. Summoned to the edge of the Earth, they journeyed west, collecting new sounds reminiscent of desert scapes, acid dreams, all-night prog vinyl spinning and a dark galaxy of protometal swirls,  exalting the band unto new, wickedly brilliant horizons. Now settled in the deep realms of Oakland, the ensemble continues to create cosmically proportioned, churning jams evocative of a rainbow of obvious inspirations but also numinous new sounds emerging from the organ – heavy riffs. If you love Blue Cheer, Black Sabbath, Can, Atomic Rooster, Hawkwind, Budgie, Uriah Heep, Deep Purple ,Italian prog, Krautrock in general, and heavy space-outs….get into Mondo Drag. They’ll knock your socks off, let your hair down and take you on a mind’s eye exploration you won’t soon forget. Though they exude love for the spiraling tapestry of heavy psychedelia of the past, they are on a rock and roll mission all their own: an unearthed prog band, futuristic in their time capsule, rocketing forward through the depths, gathering the sounds of space itself.

IF IN THE YEAR 1969, road-weary, garage-monotony-escaping Texas psych wizards picked up some electronic trinkets and united with heavy, proto-metal gods in a frenzy of aural worship on a transcendental journey through the middle of ancient ruins in a vast and endless metaphysical desert where every sound reverberates at cosmic proportions and they came upon a freaky Hammond haloed in heat waves and there, liberated of the confines of time and place , slammed out blissful, melancholy chords that shook from the shadows a tribe of Euro prog lords wielding silver flutes, took peyote and listened to tape recordings of kraut and Bach simultaneously, only long enough to get naked to a synth freak beat, creating rhythmic head bangers, seething guitar riffs, ominous organ howls and vocals stolen from wind storms, etching out sounds equally as catchy and intense as they are dark and mystic, and 9 months after this very sweaty, unforgettable orgy, had a futuristic, long-haired space baby, it would be called MONDO DRAG.

Under the spiritual guidance of the forefathers of heavy psych, prog, and proto-metal, Mondo Drag has created an amalgamation of sounds the likes of which have not resounded through the atmosphere for decades. The band’s unique sound, and rare cohesion probably stem from the fact that core members John Gamino, Nolan Girard, and Jake Sheley actually grew up together and have been playing music with each other for 15 years.

New Rituals was released by Alive Records in 2010 and for the next fourteen months the band hit the road hard, headlining a half a dozen tours in the US and appearing at numerous psych fests along the way. The band’s stellar live performances soon became a thing of wonder and saw the band share stages with contemporary artists such as Sleepy Sun, Dead Meadow, Witchcraft, Pentagram, Black Mountain, Wooden Shjips, and Naam to name a few.

After a tumultuous tour in early 2011, Johnnie Cluney (drums, vocals) and Dennis Hockaday (bass) left the band. After what seemed like an endless search for a new rhythm section, the band caught a break when Cory Berry and Zack Anderson moved back to Iowa after leaving Radio Moscow. The two came to live with the band intermittently, while rehearsing and preparing material for the new album. This transitional period also saw John step into the role of lead vocalist for the band.

In the Winter of 2011-2012, the band returned to Future Appletree Studios Too (New Rituals was recorded here also) to record their follow-up album with friend and gear guru, Patrick Stolley.  Utilizing Stolley’s extensive vintage gear library and his expansive knowledge of analog recording, they were able to capture full-band live performances recorded to analog tape. Most of the live tracking was recorded with 1940’s and 50’s RCA ribbon mics and everything recorded on the album ran through tube pre-amps and transformers of the same era.

Shortly after the album was recorded, Zack moved to Sweden and Cory soon followed to pursue their new group, Blues Pills, which was really taking off in Europe. This left the band with still no rhythm section. After much deliberation, the band decided it was time to move and reform the group so in 2013 they caravanned to Oakland, CA with a moving truck full of records and gear.

Since relocating, the group has picked up a new rhythm section consisting of Ventura Garcia (drums) and Andrew  O’Neil (bass).  The group has quickly become a staple of the bay area’s psych/prog scene.

Fast Forward to March 2015, RidingEasy Records came into the picture and signed the band for a 3 album deal.  This is the first of the trilogy.