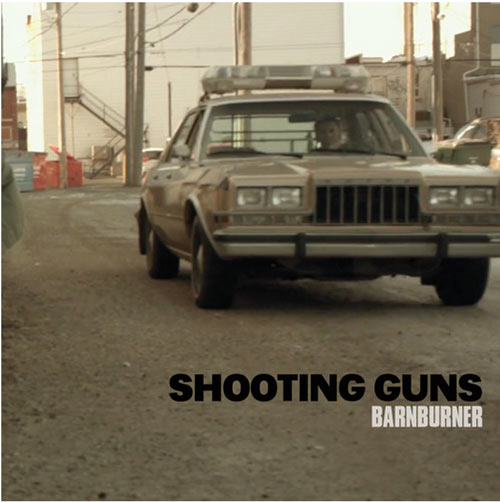 New 7″  Barnburner , from Shooting Guns is pressed, done and in our possession!  The Official release date for “Barnburner” is July 14th, but we are going to let a few out before then to our loyal mail order customers.

We’ll have second pressing Wolfcop soundtrack vinyl on clear limited to 100 copies in the next couple of weeks too!

Read All About It here!

Hailing from Saskatoon, SK, in the heart of the Canadian prairies, JUNO and Polaris Prize award nominees Shooting Guns are hard at work fortifying the heavy end of the psychedelic spectrum,  haunting the foggy moor between Sabbath-styled doom riffery and heavy pulse-riding kraut-rock.

Shooting Guns scored the soundtrack to Canadian horror-comedy WolfCop and released the official soundtrack in 2014 in partnership with One Way Static, RidingEasy Records, and Cinecoup. Their sophomore LP, Brotherhood of the Ram, released in 2013 through RidingEasy Records was nominated for the 2015 JUNO Metal/Hard Album of the Year as well as the Polaris Music Prize. Their debut LP, Born To Deal in Magic: 1952-1976, was also nominated for the Polaris Music Prize in 2012.

Rolling papers are back in stock at RidingEasyRecs

You can get all these albums and more at RidingEas

Where the fuck is Kendal Jenner with her peace mak

Did you get a copy of the recently released @iceba

If you don’t have @blackwaterholylight’s debut