Vinyl production is delayed for SVVAMP, they should all ship by September 2.   Live in Europe? We have distribution there too, check links below.  They will not have the clear variant, but they will have their own colors.

Go To SHINY BEAST or FORTE UK for all RidingEasy Titles, we sell direct to both of these companies, they have the best prices, and they pay us on time!

SVVAMP is the latest RidingEasy Records signing, we are extremely excited about having them join the RidingEasy Family.   This first self titled is raw pure, no frills,  rock n roll. 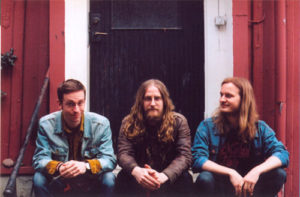 Swedish trio Svvamp is the real deal. Countless bands today strive to sound genuine — whether faking their way through a ProTools pastiche of carefully assembled takes, painstakingly tarnishing tracks to give them a “live feel” or simply copying the style of their favorite band. And, usually, their posturing is entirely transparent.

Every once in a while though, you find a band without self-conscious pretense that truly echoes the mood and vibe of an era when the rulebooks were burned with the draft cards and the act of playing rock’n’roll was simultaneously defiant and inherently casual. Svvamp is just that type of primordial beauty captured on a perfect 11-song debut.

Svvamp was created by three friends – Adam Johansson, Henrik Bjorklund and Erik Stahlgren – drawn together for the sake of jamming and a love of rock, folk and blues. Their resulting heavy psych sound is immediately gripping in its homespun feel and hints of Cream, Eric Bell-era Thin Lizzy, CCR and Crazy Horse.

“Our first recordings were made on a 4-channel cassette PortaPro (with microphones that we found lying around) and were really crude, recorded live to cassette,” the band explains. “We grew fond of that live feel and demo takes started to sound like finished songs. Over time, with almost everything made live in our rehearsal room, it became a full album.”

“Serpent in the Sky” kicks things off with a syncopated bluesy riff romp, while “Burning Down” echoes the stomping freeform feel of the New Yardbirds’ “How Many More Times.” Once things settle in to the laid back shuffle of “Free At Last”, Svvamp really finds its groove and lets loose like Axis: Bold As Love Jimi Hendrix. “Time” sounds almost like Ziggy Stardust era Bowie with a boogie swagger and cheeky vocals. “Set My Foot and Leave” sounds as earnest and unpretentious as The Faces (and at times like Rod Stewart’s “Maggie May”, without all that shaggy, smug Rodness). Elsewhere, “Blue In the Face” slips into a heavy groove while “Oh, Girl” bashes out stop ’n’ go riffs with the Marshall stack dramatics of Blue Cheer. Chiming mandolin and acoustic guitars lead the charming closing anthem, “Down By The River” (not the Neil Young song).