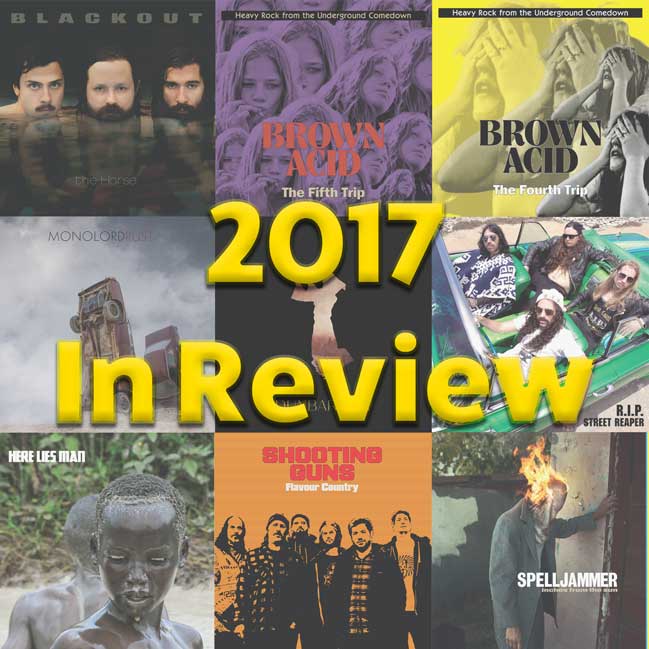 2017 has been a pretty fantastic year for us over here at RidingEasy Records with a wide variety of new releases, merch and events that are only going to get bigger & better as this year turns into the next. So without further ado, let’s get into what made this year so special.

We’ll start with the music.

We started off the year strong. As the first record we put out in 2017, Here Lies Man‘s first full length has been described as …if Black Sabbath played afrobeat. If that sentence alone doesn’t make you want to check out this album, you might want to get yourself checked.

“Enormously enjoyable. Like Funkadelic at their early 70s heavy zenith or the darker works of post-punk pioneers The Pop Group: dancefloor fillers for the black of heart.” — Metal Hammer

The 4/20 release date for The Fourth Trip was very fortuitous, because this might have been our stoniest Brown Acid compilation yet. From Bad Axe to the return of Australia’s Ash, this record is a journey from start to finish.

“The extensive research that went into digging up these ‘next to impossible to find’ tracks is nothing less than staggering. Very rarely does a release merit 5/5, but you’re looking at one right here!” — Spill Magazine

“Some of the mind-melting jams on The Fourth Trip are so rare that the die-hard fuzz junkies who compiled the Brown Acid series say that you’d have a better chance of hitting the lottery than finding a physical 45 single by the bands featured on their latest installment.” — Dangerous Minds

There are a few words you could use to describe Blackout, but none are more accurate than raw. Brooklyn doom wrapped in a fuzzy psychedelic wrapper, The Horse is doom striped down to its basics: fat guitar tones, methodical drums, and emotion filled vocals.

“Brooklyn’s premier fuzzed-out doom band seems to have moved into a more psychedelic and garage rock-influenced phase without giving an inch on their customary penchant for slow, crushing distortion and massive walls of feedback laden clamor. The album hits hard the whole way through and burns slow into screeching embers with the eight-minute titular closer.” — Noisey

Odds are, everybody you know would like Dunbarrow‘s S/T first record…your dad, your edgy coworker and the classic-rock blueshound janitor at your apartment building. There’s something about this record that’s just universal. It has vibes reminiscent of Zeppelin, the Stones and even St. Vitus. If you like rock n roll or if you like classic doom check this album out. You won’t be disappointed.

“What Dunbarrow bring to the RidingEasy lineup is a firm grip on an aesthetic born as much of ’70s worship as influence taken from earliest Witchcraft and the best of the Scandinavian retro doom set — the Pentagram loyalism of Burning Saviours comes to mind — as well as an abiding rawness of sound that complements the fluidity of their groove.” — The Obelisk

For those of you who appreciate the psychedelic side of doom/heavy rock will want to listen to all of Shooting Gun’s catalogue, if you haven’t already. Flavour Country is another fantastic step in Shooting Gun‘s already stellar catalogue.

“A welcome release from a band who with each instrumental tied to its own strictures of lysergic space rock, nevertheless always sound essential… Some of the heaviest riffs they have created yet and there is a great sense of freedom and fun. Instrumental heavy psych bands are ten a penny these days, few are as vital as Shooting Guns.” — Echoes & Dust

Spelljammer – Inches from the Sun

Originally released in 2010, Inches from the Sun never got a physical release…until now. Spelljammer‘s first full-length album is not to be glossed over. It’s another solid addition to Spelljammer‘s catalogue which already includes Ancient of Days & Vol. II.

“Their debut four track effort ‘Inches From the Sun‘ is just as scorching as the title reveals, I only say this once; you can always rely on Sweden when it comes to this kind of music!” — Planet Fuzz

I’m not sure how much of an introduction this record needs. If you have heard it, you know what’s good, and if you haven’t…well, there’s just no accounting for some taste. With guest appearances from Trevor Church from Beastmaker and John Gamino from Mondo Drag, this album rips. But did you expect anything else from Monolord?

“Hugely accessible without having sacrificed their crushing heaviness.“ — Metal Hammer

“Monolord’s records have only gotten heavier, and now the band has taken a turn for the catchy (yet still crushing).” — Metal Injection

“Rust is perfect; it’s as fuzzed out as any of the genre’s great records, but the mix is clean and even, allowing the drums and vocals to cut through. Most importantly, there are songs aplenty: you’ll be humming the riffs and vocal hooks immediately.” — Metal Sucks

Doom is dead. Well, at least that’s what R.I.P. will tell you. Regardless of the life status of doom, R.I.P. is definitely breathing new life into a stagnating genre. It’s called ‘Street Doom’, and R.I.P. is bringing it with no apologies.

“Street Reaper is just a disgusting, punk-rock-meets-Black Sabbath shredder that’s going to leave a film of filth on any speaker that has the misfortune to output its gnarly sounds.” — Metal Injection

Because one Brown Acid compilation wasn’t enough, on Halloween we released the Fifth Trip. This is one of the most rock heavy Brown Acid records yet.

“Rare and oddball hard rock and heavy psych cuts that provided the soundtrack to the hippy comedown… Barresi hopes that Brown Acid will do for hard rock, proto-metal and heavy psych what Nuggets did for garage rock, and bring it to a wider audience of collectors and music fans.” — The Guardian UK

Wrapping things up nicely with another release from Here Lies Man, 2017 ends with four new songs from everyone’s favorite fuzzed-out afrobeat band. Including a cover of Fela Kuti’s Sorrow, Tears & Blood, this isn’t a release that should go under your radar.

“The Los Angeles outfit’s self-titled debut was named one of Rough Trade’s Top 10 Albums of 2017 and the new 12″ further demonstrates the group’s ability to create psychedelic sounds that sound remarkably new. The EP is as powerful as its full-length counterpart.” — PopMatters

This year we had all sorts of new items in our store – from Sleazy necklaces to satin jackets to Charlie hats. Check out our store and see what you missed.


Error: API requests are being delayed for this account. New posts will not be retrieved.