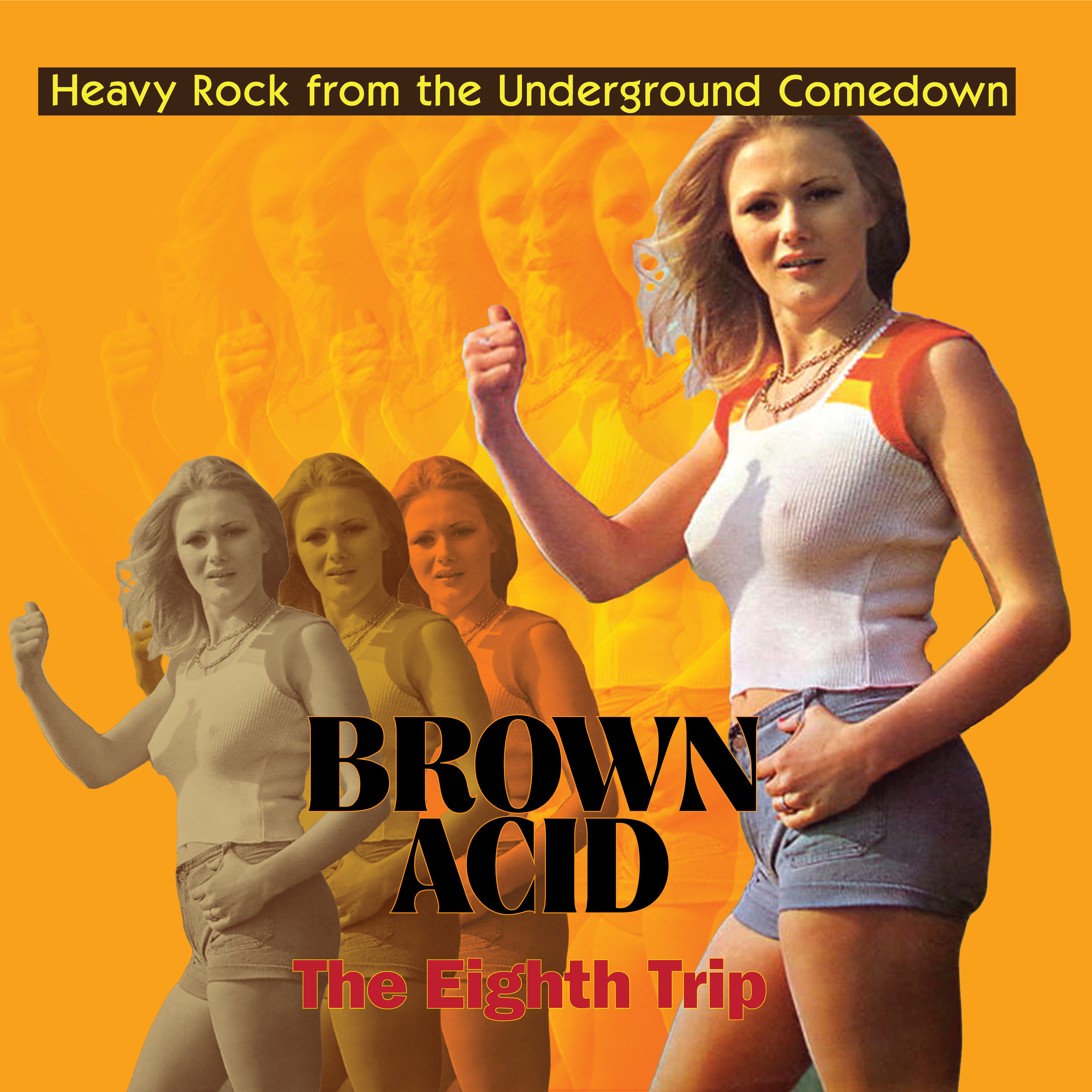 “So rare that diehard fuzz junkies say you’d have a better chance of winning the lottery than finding a physical 45 rpm single by one of the bands featured on their latest installment.” — Dangerous Minds

“Will do for hard rock, proto-metal and heavy psych what Nuggets did for garage rock, and bring it to a wider audience of collectors and music fans.” — The Guardian

About Brown Acid: The Eighth Trip:

This Trip comes straight at ya with an all out attack, quite literally. The residents of St. Clair Shores should consider themselves lucky to have been so close to the greatness of Attack! “School Daze” kicks out the jams Detroit-style, but has enough flair and style to have our main man Jimi rolling over in his grave. Another prime example of why Detroit is known as Rock City!

Speaking of rock, White Rock will knock your stank-ass socks off with their 1972 burner “Please Don’t Run Away”. This 45 was privately released by this Houston-based band that reportedly played shows with Josefus, Stone Axe, and Purple Sun. And it was basically unknown until it surfaced at the Austin Record Convention in 2018! The fact that there are still completely unknown records out there to be discovered never ceases to amaze us.

They don’t say “Don’t Mess With Texas” for nothin’! Riverside called Austin home way before anyone was worried about keeping it weird. This two-sider from 1974 rips from front to back. It’s also exclusively available here and is virtually unknown. Go ahead, try to look for it anywhere. Currently, there’s no proof anywhere online that it exists.

From our neighbor up north, we bring you Luke and the Apostles! Don’t be fooled by the name, this ain’t no Xian group, even though this 45 is of biblical proportions.The flip of this single “You Make Me High” is a Faces-esque ballad of the highest caliber that will move you to tears if you’re not careful with it, but “Not Far Off” isn’t about moving you emotionally; it’s about moving you physically. Fuck jam? We think so. The Doors and Elektra Records’ producer Paul Rothchild called the Luke and the Apostles LP the “greatest album [he] never got to make”.

The lyrics to this 1977 single on Vacation Records are about as boneheaded as it gets. Hard rock songs from working class men about working hard and letting loose is a common theme in the Brown Acid realm, and “I Need My Music” by Mine Hill, New Jersey’s Tourists, is yet another great one to get you through the work week. I think we can all agree: we need our music too…among other things!

Ohio strikes again. This time a bit later than the other Buckeye State singles we’ve comped, but no less bangin’! On the Chance record label, the Bartos Brothers Band is billed as Gambler, but post-release, the band covered at least some of the copies with stickers that corrected this. There’s very little information about the Bartos Brothers Band online, and as of this writing, the release date is incorrect on Discogs and the Popsike hit very wrongly lists the genre as “Glam/Hair Metal” from the 1980s. We’re stoked to be compiling this single for the first time ever and to be setting the record straight.

And yet again, Ohio brings the thunder! We brought you the B-side of Inside Experience’s sole 45 back on the Third Trip and now we exhaust the band’s output by presenting their especially psychedelic cover of Cream’s “Tales of Brave Ulysses”. The band pressed and sold out of 500 copies of this record back in 1968 thanks to some airplay on Detroit’s CKLW, but they never recorded again. However, Inside Experience’s lead guitarist and singer, Marty Soski, went on to play in Lance (as heard on the Fifth Trip) and two metal bands which you will be hearing sooner than later…

Karma, slightly better known as The Contents Are, released an LP and a 45 in 1967 and then followed up with their swan song “New Mexico” in 1969. The single was oddly released under Karma on the Onk Enterprizez label with “N.S.U.” as the B-side and on Rok Records as the flip to “Future Days” as The Contents Are. Apparently, Mercury Records bought the rights to the Rok 45 with the intention to release it nationally, but never actually got around to it. Their loss!

Obviously we don’t need to go into how much great music Memphis, Tennessee has brought us over the years, but Moloch doesn’t usually get mentioned when we’re talking about the “Home of the Blues” and the “Birthplace of Rock and Roll.” Maybe we should change that. Moloch played with The MC5 and The Stooges and recorded an LP in 1969 for the Stax subsidiary, Enterprise Records. Although the band made a great blues rock record, it sadly didn’t get the love it deserved and the band folded. Moloch guitarist, Lee Baker, reformed the band with a slightly different line-up and released this 45 in 1972 against great odds. It too was unfairly overlooked…until now.

While we’re still talking about Memphis, y’all ever heard of this guy, Elvis Presley? Apparently, he was kind of a big deal and popularized a song called “Heartbreak Hotel” back in 1956. That’s cool and all, but damn us if we don’t dig Grump’s 1969 take on the song a whole hell of a lot more than the King’s version. Maybe that’s sacrilege, but nothing’s sacred when it comes to Brown Acid.

Get All Seven previous releases in one set

About the Brown Acid series:

Some of the best thrills of the Internet music revolution is the ability to find extremely rare music with great ease. But even with such vast archives to draw from, quite a lot of great songs have gone undiscovered for nearly half a century — particularly in genres that lacked hifalutin arty pretense. Previously, only the most extremely dedicated and passionate record collectors had the stamina and prowess to hunt down long forgotten wonders in dusty record bins — often hoarding them in private collections, or selling at ridiculous collector’s prices. Legendary compilations like Nuggets, Pebbles, ad nauseum, have exhausted the mines of early garage rock and proto-punk, keeping alive a large cross-section of underground ephemera. However, few have delved into and expertly archived the wealth of proto-metal, pre-stoner rock tracks collected on
Brown Acid.

Lance Barresi, co-owner of L.A./Chicago retailer Permanent Records has shown incredible persistence in tracking down a stellar collection of rare singles from the 60s and 70s for the growing compilation series. Partnered with Daniel Hall of RidingEasy Records, the two have assembled a selection of songs that’s hard to believe have remained unheard for so long.

“I essentially go through hell and high water just to find these records,” Barresi says. “Once I find a record worthy of tracking, I begin the (sometimes) extremely arduous process of contacting the band members and encouraging them to take part. Daniel and I agree that licensing all the tracks we’re using for
Brown Acid is best for everyone involved,” rather than simply bootlegging the tracks. When all of the bands and labels haven’t existed for 30-40 years or more, tracking down the creators gives all of these tunes a real second chance at success.

“There’s a long list of songs that we’d love to include,” Barresi says. “But we just can’t track the bands down. I like the idea that Brown Acid is getting so much attention, so people might reach out to us.”


Error: API requests are being delayed for this account. New posts will not be retrieved.